The Taste of Mekong in Bacolod 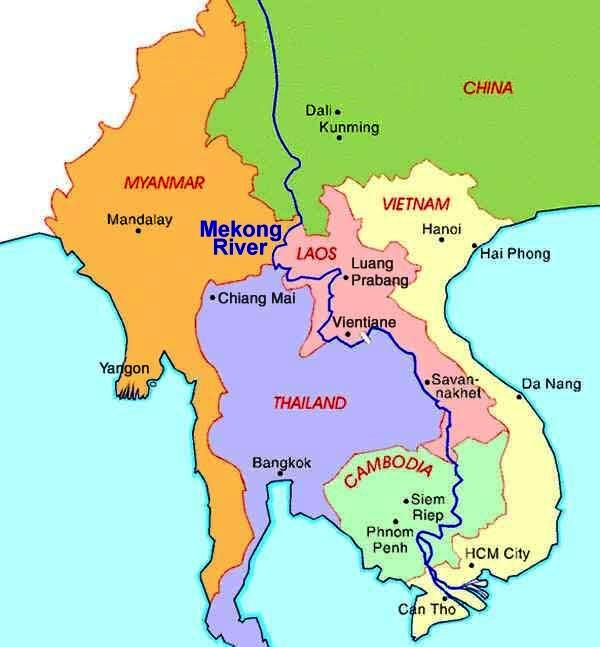 One of my favorite foreign cuisines is the Thai cuisine. When I was working in Manila Hotel, I would always take the table closest at the Thai food station in Café Ilang-Ilang whenever I eat buffet. Last year, during my Thai trip, I brought home ingredients for a Tom Yum soup, scoured the internet for recipes, and cooked it myself. I seldom cook, so it shows how partial I am when it comes to Thai food.

Imagine my delight when I got invited to try the food of Mekong Fresh Noodle and Grill located in the Triangle Plaza Food Court in the Shopping Center of Bacolod City, Negros Occidental, Philippines. If you are in the area, it is right beside Pan de Manila, that outdoor area near Greenoz and Houston Appliance. It’s open from 11am to 9pm every Mondays to Fridays, and 4pm to 10pm every Saturdays and Sundays.

It’s located near Greenoz and Pan de Manila in the Triangle.

Mekong Fresh Noodle and Grill offers the cuisine of the countries along the Mekong River, namely, Laos, Thailand, Cambodia and Vietnam. So, let’s get going with our Mekong food journey. Let’s start from the south to the north. Along the way, let me walk down memory lane on my memorable visits in these countries.

Ton-Trong Ho takes us through their menu.

I recently wrote about Vietnam (Read: Traveling to Vietnam through Visa On Arrival Service) and even recalling my First-time in Ho Chi Minh City. I’ve enjoyed the meals I’ve had when I went to Ho Chi Minh, such as the spring rolls, the stir fry noodles with baguette, and the pho noodle soup. I first had a brush with the Vietnamese cuisine in Manila when I ate in a Pho restaurant. I’ve come to love the Pho noodle soups, especially with mint, local lemon and some chili paste.

In Mekong Fresh Noodle and Grill, we started with the Vietnamese Coffee. I love how they make their coffee with milk, even better than some of the coffee I’ve tried in posh coffee shops.

The three at the left are Vietnamese coffee. The one at the right is the Thai Iced Tea.

For appetizers, we also had some Pot Stickers, which you can also find in a Vietnamese menu, although these dumplings can be traced in China, and similar to a Japanese gyoza. Mekong’s Pot Stickers have a different twist to it because they are fried first and then steamed, adding a crispy texture to its folds. One serving has five of these yummy treats, a great way to commence your meal.

The Pot Stickers is one of my fave.

I remember my trip to Cambodia, especially to Siem Reap, where I was able to see the World Heritage Site Angkor Wat, and to its capital, Phnom Penh. It was in Siem Reap, at the end of Pub Street, where I had tasted one of the most sumptuous stir fry noodles. It was not in the restaurants and bars with neon lights where we found this delicious food. Rather, it was at the far end, within the rows of stalls that sell street food.

I was researching on Cambodian food early this week for one of my online writing assignments. In my research, I came to know Amok, the country’s national food, which is steamed coconut milk with curry and other ingredients wrapped in a banana leaf. Mekong made us try its Amok Chicken under its Khmer Village Specialties. However, due to limited time, they didn’t wrap it in banana leaf. But the food is sumptuous, with the taste of turmeric and curry leaving an after taste on my palate. It was good to be able to taste a food that I have only read and seen in the internet.

We’ve come to the country that I have most frequented. I’ve been to Thailand six times, and all for business – meeting, conferences, and familiarization trips. Now, you know why it is one of my favorite cuisine. I have eaten in several luxurious hotels and classy restaurants in Bangkok and Chiang Mai. But one of my memorable meals was in a local eatery in the heart of Chiang Mai, in its inner walls. The eatery serves Hainanese Chicken and Satay since 1957.

In Mekong, one of us tried the Thai Iced Tea, which looked refreshing as well. We also had the Papaya Salad as one of the appetizers.

The lightest color in the foreground is the Thai Iced Tea.

We also had the Phad Ke Mow Chicken and Phad Ke Mow Shrimp. These are stir fried flat rice noodles with chili and basil.

For its Thai Village Specialties, we had Thai Curry Beef, which is best eaten with rice.

I’ve visited this land-locked country about 15 years ago. From Udon Thani, Thailand, we crossed the Friendship Bridge that spans both countries, connecting the opposite banks of Mekong River, towards Vientiane, the capital of Laos.  Though I only spent a few days in Laos, I still have a recollection of the food I’ve eaten in Laos. A memory of Laos was drinking beer along Mekong River while the sun was setting. And then there were the noodle houses.

At Mekong, we ate the Lad Na, which is stir fried flat noodles with egg, pechay and yellow onions. And to cap our meal, we had Lao Sticky Rice and Mango for dessert.

The sticky rice and mango is also common in Thailand. But then again, most of the food here are also shared by the countries here. Take for example the Grilled Chicken Lemongrass which can be seen in Thai and Vietnamese cuisines. In fact, when I went to Laos, I have tried their Kai Look, which is Balut to us, Filipinos. It is a duck embryo. There I realized that we are all connected.

Therefore, Filipinos, particularly Negrenses (the people of Negros Island), will get to enjoy the food in Mekong because some of them are also almost similar to our local food, while it maintains the authenticity of the cuisines with the herbs that are usually used by these countries. The best way to find out if it is apt to your palate is to try the food yourself. The food are affordable so you really get good value for your money.

20 thoughts on “The Taste of Mekong in Bacolod”