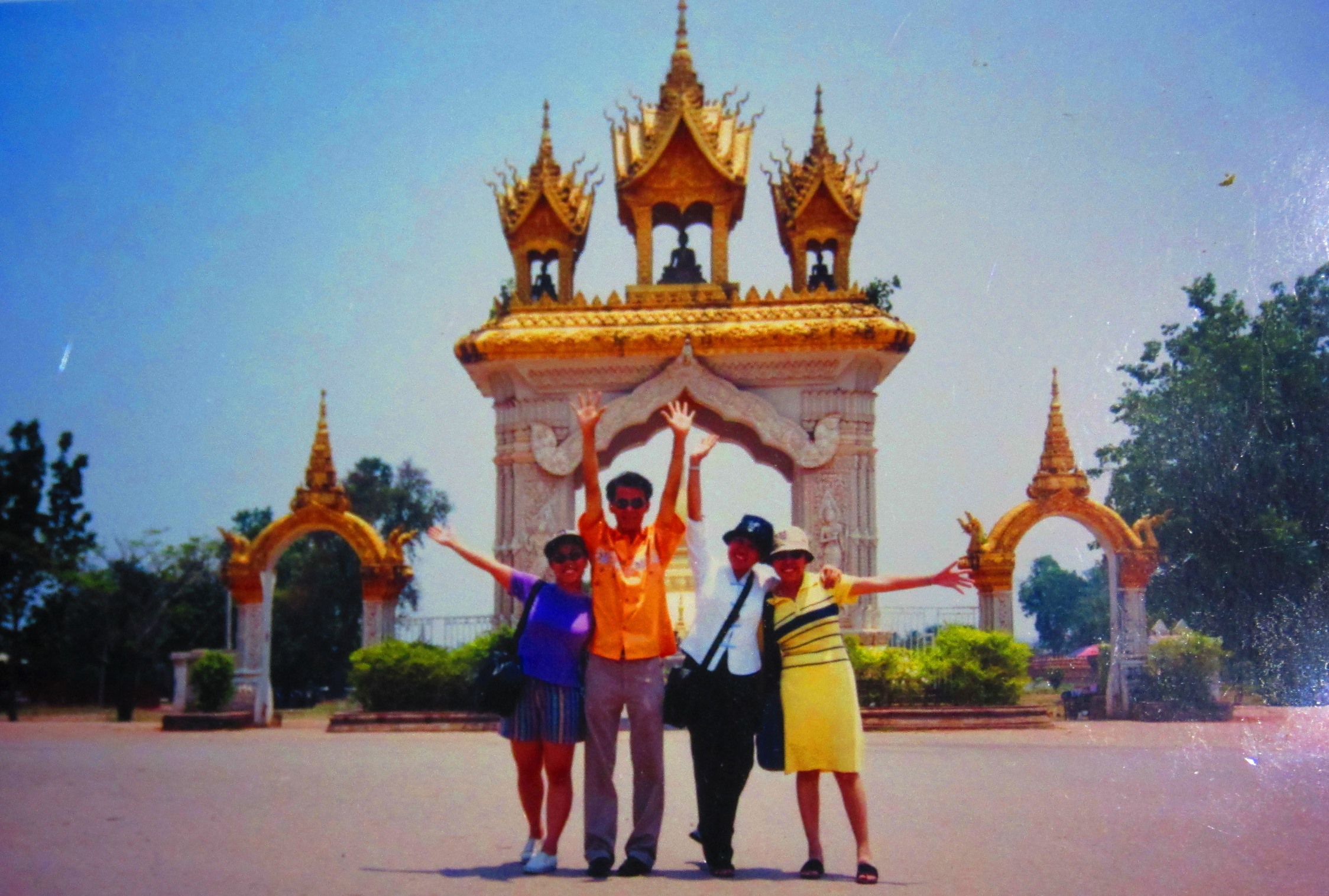 It was in 2001 when my friends and I went to Vientiane, Laos via a train ride from Bangkok, Thailand. It was unplanned and all done in the name of adventure. Only our instincts were our guide as we embarked on this remarkable journey.

Laos was not what I had expected. Its capital, Vientiane, was not a bustling metropolis like Bangkok, Kuala Lumpur or Manila. No wonder it claims the title of being “the largest village”. The dusty road is something one has to live up with.

The Patuxai. The one at the right is the real monument and the one at the left is a replica at Legoland Malaysia.

But for one to tour Vientiane, must-see places are the Patousai  or Patuxai (version of Paris’ Arc de Triompje), Pha That Luang (the golden temple) and Vat Phra Keo (most popular temple). Vientiane’s highlights are its temples. Its local restaurants serve delicious native cuisines.

One thing that shouldn’t be missed when in Vientiane is watching the sunset at the Mekong River banks as you gulp on a bottle of Lao beer in one of the cottages or local bars within the vicinity. The capital can be toured in just a day by foot or by tuktuk, a tricycle-like mode of transportation.

Go to the morning market for local finds. The morning market offers cheap local goods, although many of them can also be found in Bangkok. Climb Patousai which is found at the heart of the city, is where you will see the city view from atop the monument. Take the same road going to Pha That Luang and see how it glows like a sun at a distance. It is easy to go to the major attractions like the museum and the palace because they are very accessible.

While touring Vientiane, we chanced upon a European who shared that if you want to retire and just enjoy life minus the hassles and stress of city-life, Laos is the best place to spend one’s “the rest of his life.” After seeing the sleepy city of Vientiane, we understood what he meant by what he said.

It is best to have a local guide to tour you around the city for convenience although you wouldn’t really get lost in Vientiane. However, not many locals can understand and speak English and sometimes it’s frustrating trying to communicate with them if you are not familiar with their language. Although the local currency is kip, local shops in Laos also accept baht, or the Thai currency.

During April to June, the country is in its hottest weather so bring a cap and lots of extra shirts made of thin cloth. Laos also celebrates Songkran so be ready to get wet when you chance upon celebrating the Buddhist New Year in their place. Most of all never leave Laos without trying their iced coffee, which is a local version of Starbucks’ cold coffees.

From Bangkok, there are trains and buses to Nong Khai. From Nong Khai, hire a car near the border to get you across the Friendship Bridge and to the border of Laos. At the Lao side, there are mini-buses and small vehicles that will bring you up to the Morning Market.

In a small city like Vientiane, it is easier to walk. There are tuktuks or tricycles available, but they are too noisy and could not keep the dust of your face.

It’s a small city and everyone knows everybody. A friend of mine had friends there when we went to Laos. One of her friends owns an internet cafe-cum-bar. It’s a relaxing hideaway from the chaotic mega-cities and urban jungles. The laid-back lifestyle is a welcome change, especially for those who want to retire to a quiet life.

Bars are small and are like houses that were converted into bars. But you would be surprised to find them full. One bar even has the entourage of a wedding coming in to spend the reception there. Just be sure you have a ride home because hired vehicles are rather scarce during the late hours of the evening.

It’s a low-budget accommodation but it is near to most establishments in Vientiane. When we were there, many Asian and European backpackers were staying in this small guest house.

The room is small with only an electric fan as its only cooling system. Baths are common, so you have to wait in line to use the toilet. But for travelers, it is a welcome thing rather than camping in the open air. I really couldn’t remember if there was a curfew at the guest house but I think we had to inform the front desk that we were to come in late in the evening.

4 thoughts on “First-time in Vientiane, Laos”